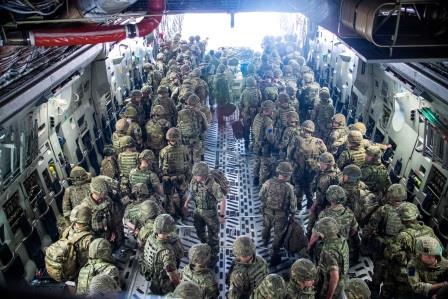 LONDON (UK): The Taliban are in control of Afghanistan and British and NATO forces will not be returning to fight the insurgents, Britain’s defence minister said on Monday.

“I acknowledge that the Taliban are in control of the country,” Defence Secretary Ben Wallace told Sky News. “I mean, you don’t have to be a political scientist to spot that’s where we’re at.”

Asked if Britain and NATO would return to Afghanistan, Wallace said: “That’s not on the cards that we’re going to go back”

Wallace said the military side of Kabul airport was secure and that Britain was doing everything it could to evacuate British citizens and Afghans with links to Britain.

Britain has relocated its embassy to Kabul airport from the city. Asked what he would feel to see the Taliban flag flying over the former British embassy building in Kabul, Wallace said:

“It’s not the embassy anymore, we have left that location … so it’s now just a building.

“Symbolically, it’s not what any of us wanted.”

Wallace said it was not yet the right time to decide on whether to recognise the Taliban as the Afghan government.

“I think there is a lot of more to come before those decisions are made,” he said. “The proof of the pudding will be obviously in their actions rather than their rhetoric.”

‘Free Guy’ debuts at No. 1 with surprisingly strong $28.4 Million