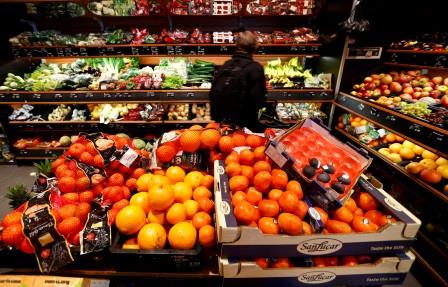 FILE PHOTO: Full shelves with fruits are pictured in a supermarket during the spread of the coronavirus disease (COVID-19) in Berlin, Germany, March 17, 2020. REUTERS/Fabrizio Bensch

BRUSSELS: Euro zone inflation accelerated to 2.2% in July, its highest rate in nearly three years and above the European Central Bank’s target of 2.0%, final data released on Wednesday by the EU statistics office showed, confirming its earlier estimate.

The ECB is forecasting a further increase of annual inflation towards the end of the year but it sees the acceleration as caused largely by temporary factors which would not require changes in policy.

Supporting the ECB’s stance, underlying price pressures remained muted, with a core indicator excluding volatile food and fuel prices at 0.9% on an annual basis, the same as in June, Eurostat data showed, confirming the previous reading published in late July.

An even narrower measure, which excludes also alcohol and tobacco prices, eased to 0.7% from 0.9% in June, also in line with the initial estimate.

The higher rate in July was largely due to a spike in energy prices, which Eurostat said on Wednesday rose 14.3% on an annual basis, the highest increase this year. The reading revised upward Eurostat’s earlier estimate of a 14.1% hike.

Food, alcohol and tobacco prices rose annually by 1.6% in July, Eurostat confirmed on Wednesday, whereas prices in the services sector, the largest in the euro zone economy, increased 0.9%.