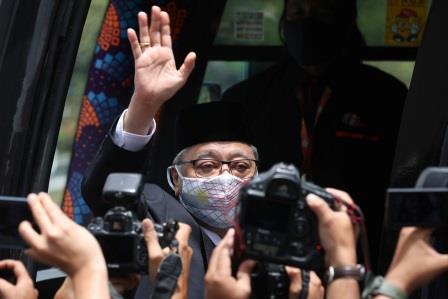 Former Malaysian Deputy Prime Minister Ismail Sabri Yaakob waves to members of the media before departing for a meeting with the King, in Kuala Lumpur, Malaysia, August 19, 2021. REUTERS/Lim Huey Teng

Muhyiddin Yassin resigned as prime minister on Monday after conceding he had lost support from his alliance, bringing to an end a fraught 17 months in office and throwing the country into further political chaos amidst a COVID-19 surge and economic slump.

If confirmed, Ismail Sabri’s appointment would mark the return of the United Malays National Organisation (UMNO) party to leadership, three years after it lost a general election because of corruption allegations, especially around the multi-billion dollar scandal at investment fund 1Malaysia Development Berhad (1MDB).

Muhyiddin, who is now serving as caretaker PM, said on Thursday his alliance unanimously backed his former deputy to ensure continuity of policies on “fighting COVID-19 and the nation’s recovery” until it was suitable to hold elections.

The support was conditional on Ismail Sabri ensuring that the new cabinet members were free from graft charges, he said in a statement. Several UMNO politicians were charged with corruption after the 2018 election defeat.

Ismail Sabri, 61, has the support of 114 lawmakers out of the 222-seat parliament, UMNO lawmaker Ahmad Maslan said on Twitter.

King Al-Sultan Abdullah, the constitutional monarch who will be appointing a new premier, is scheduled to meet with the country’s other senior royals on Friday. A decision on the new government head is likely to be announced after that.

UMNO, governed the country for over 60 years until the election rout and two governments that came after the polls proved to be fragile and short lived. The party was part of the last one, but Muhyiddin’s coalition collapsed when some UMNO lawmakers pulled out.Oh Ei Sun, a senior fellow at the Singapore Institute of International Affairs, said Ismail Sabri’s government might not be stable either given his slim majority.

In Muhyiddin’s government, Ismail Sabri was among ministers responsible for framing Malaysia’s response to the pandemic and he could be taking over at a time when the country’s coronavirus infections and deaths per million rank as the region’s highest.

Public anger has grown in recent months over the administration’s handling of the crisis as infections continued to spread at a record pace despite multiple extended lockdowns and ramped up vaccinations.

A member of parliament since 2004, Ismail Sabri served as a cabinet minister under two other prime ministers before Muhyiddin and held various portfolios including rural and regional development, agriculture and domestic trade.

WHO urges action as Indonesia mobility returns to pre-pandemic levels

WHO urges action as Indonesia mobility returns to pre-pandemic levels