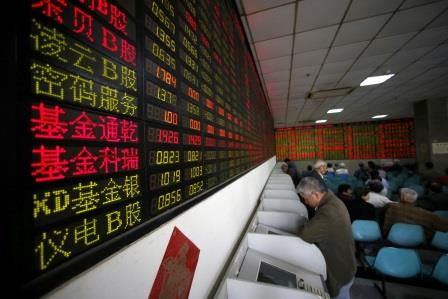 LONDON (UK): Global shares fell for the fifth straight day and the dollar remained firm in a flight to safety on Friday as rising coronavirus cases compounded concerns over Chinese growth and the outlook for US stimulus.

The swirling economic currents have weighed on sentiment all week, setting a cautious tone ahead of a meeting of US central bankers at Jackson Hole next week, with markets watching for any sign of monetary tightening in the world’s biggest economy.

“The Delta variant remains the biggest worry for investors right now, and along with the question of waning vaccine efficacy has made the risks to the outlook much more pronounced relative to just a few months ago,” Deutsche Bank analyst Jim Reid said in a note to clients.

“However, nervousness about possible tapering by the Fed ahead of next week’s Jackson Hole speech by Chair (Jerome) Powell, along with a potential Chinese growth slowdown have further played on investors’ minds, and brought the narrative a long way from the reflation hopes many had back in Q1.”

The MSCI World Index, a broad gauge of global shares, was last down 0.3%, on course for its biggest weekly fall since February as small gains in Europe’s top markets failed to make up for Asian losses overnight.

Asian shares limped into the weekend with their lowest close since November, with MSCI’s broadest index of Asia-Pacific shares outside Japan down 1.1% and 4.9% lower on the week, its weakest since February.

The Hong Kong benchmark touched its lowest this year, before closing down 1.8% while Chinese blue chips fell 1.9% with markets spooked by slowing Chinese growth and regulatory intervention across a range of sectors.

Despite the market weakness, Mark Dowding, chief investment officer at BlueBay Asset Management, said abundant liquidity meant there was “plenty of cash that can buy the dip, so we doubt any correction in risk assets will run too far”.

“Once we can look beyond the crest of the Delta wave, there may be calmer waters ahead and so this seems like a good time to be building and holding positions, with an eye towards the medium-term rather than playing for the vagaries of shorter-term price action.”

With cases of the Delta variant of coronavirus picking up again across the globe from the United States to Australia, New Zealand and Japan, safety was key and the dollar a chief beneficiary.

The dollar index, which measures its performance against six rivals, rose as high as 93.684 for the first time since early November, while gold also rose, up 0.1% and heading for its second straight week of gains.

Elsewhere in currencies, the Australian and New Zealand dollars both fell to nine-month lows as coronavirus cases there rise. The euro was up 0.1%.