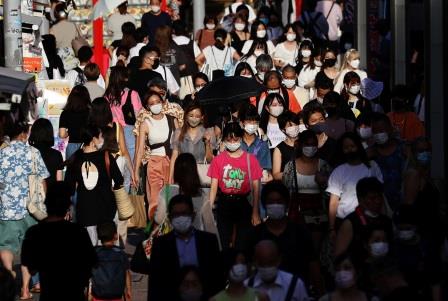 TOKYO (Reuters) – Japan plans to dramatically ramp up daily COVID-19 tests, borrowing from anti-contagion measures used in the recent Tokyo Olympics, as it battles its worst wave of infections, driven by the Delta variant.

New infections exceeded 25,000 on Thursday for the first time, a tally by national broadcaster NHK showed, with the surge mainly among those in their 40s and 50s, most of whom are unvaccinated.

The speed and severity of Japan’s Delta-driven infections are overtaking the strategy of targeted cluster tracing it has favoured over the mass testing used by many nations.

The cabinet office said Japan intends to employ its full daily capacity of about 320,000 polymerase-chain reaction (PCR) tests, or about triple the use now.

“At least in a big city like Tokyo, the cluster methodology won’t work anymore,” said Kazuaki Shindai, a doctor and public health researcher at Kyoto University.

“If individuals can get more PCR testing, it may be helpful to find out their condition and isolate themselves and then prevent them going about.”

The government wants to use the full capacity of public and private testing “as much as possible,” said Makoto Shimoaraiso, a cabinet official guiding the pandemic response.

Free PCR screenings are being offered to passengers on some airline flights, and local governments plan to use high-speed antigen tests in shopping areas, he added.

Although Japan widened a state of emergency this week over Tokyo and much of the country, the effect on public behaviour is diminishing in its fourth emergency of the pandemic.

Top national health adviser Shigeru Omi urged the government to step up testing and add hospital beds, suggesting that the law may have to be amended for tougher lockdowns.

Japan’s COVID-19 testing, or the lack of it, has been a controversial topic throughout the pandemic, standing at just 150 tests per 1,000 people now, versus 230 in South Korea and 1,520 in the United States, website Our World in Data shows.

But massive, regular testing, with close to 600,000 tests, was a key feature of infection control at the recently completed Tokyo Olympics.

It was a “double standard” that mass testing figured at the Games but not more widely for Japan, said Kenji Shibuya, the former director of the Institute for Population Health at King’s College London.

It is never too late to increase testing in the virus battle, however, he said, adding, “This should also be combined with the efforts to isolate and monitor the infected people.”