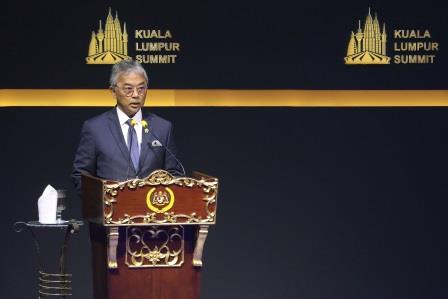 Ismail Sabri, who was Muhyiddin’s deputy, takes over as the Southeast Asian nation grapples with a surge in COVID-19 infections and an economic slump, amid growing public anger over the handling of the health crisis.

His appointment returns the role of prime minister to the United Malays National Organisation (UMNO), Malaysia’s ‘grand old party’, which was voted out in a 2018 general election amid widespread accusations of graft.

Ismail Sabri, 61, secured a slim majority, with the backing of 114 of parliament’s 222 members, the palace said in a statement.

“The king hopes the political crisis ends immediately and members of parliament can put aside their political agenda … the people should not be burdened by unending political crisis at this time,” the palace said.

The king had earlier said the new prime minister would have to face a confidence vote in parliament to prove his majority soon after his appointment.

Ismail Sabri will be Malaysia’s third prime minister since the 2018 election, after UMNO pulled its backing for Muhyiddin last month, citing his failure to manage the pandemic.

In Muhyiddin’s government, Ismail Sabri was among the ministers charged with framing Malaysia’s response to the pandemic and takes over at a time when coronavirus infections and deaths per million rank as the region’s highest.

A member of parliament since 2004, Ismail Sabri served as a cabinet minister under two other prime ministers before Muhyiddin and held portfolios such as rural and regional development, agriculture and domestic trade.

Malaysia has been in a state of political flux since the defeat of UMNO, which had governed for more than 60 years since independence. Two coalitions have collapsed since then because of infighting.

Public anger has grown amid the politicking, as infections spread at a record pace, despite extended lockdowns and ramped-up vaccinations.