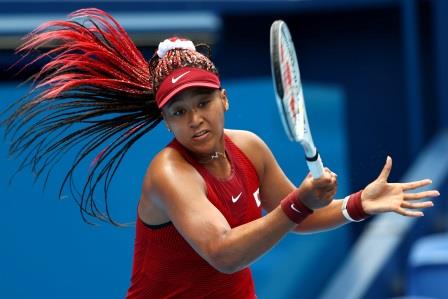 An error-prone Naomi Osaka was stunned 3-6 6-3 6-3 by Jil Teichmann in the Western & Southern Open third round in Cincinnati on Thursday but the world number two said she had tried her best and would not lose any sleep over the defeat.

Osaka cruised through the first set and looked like she would make short work of the Swiss wild card before Teichmann settled down and took the second.

Momentum swung firmly in the world number 76’s direction in the fourth game of the decider when Osaka missed overhead smashes on back-to-back points, bringing a scream of frustration from the Japanese player.

The miscues continued to pile up for the four-times Grand Slam champion, who issued her 41st unforced error on match point when she sent a service return long as Teichmann advanced to the quarter-finals with the biggest win of her career.

“She’s a very tough opponent, a Grand Slam champion, and I’m the underdog, which is a bit easier. But you’ve got to start somewhere.”

Osaka said she struggled due to a lack of competitive matches, with the 23-year-old competing in her first event outside the Tokyo Olympics since withdrawing from the French Open in May citing mental health issues https://www.reuters.com/lifestyle/sports/osaka-withdraws-french-open-following-row-over-media-boycott-2021-05-31.

“I thought that for me I felt a bit hesitant, and normally I don’t feel that way,” she said.

“Of course I put myself in this position by choosing not to play that many tournaments, so, yeah, just feeling more comfortable with it, feeling more confident in myself, as well, because I feel like there were times where I was doubting myself.”

Osaka said her third-round exit at the Tokyo Games had impacted her approach to the game on Thursday.

“I also thought that my performance in Tokyo was also lingering in my mind a bit, because I felt like I was overly aggressive there,” she said.

“I felt like I learned a lot from this match today, and if anything to take away from this, I tried my best throughout the entire match so I can sleep at night.”

Osaka will look to find her form ahead of the upcoming U.S. Open in New York, where she is a two-time champion.

(Reporting by Rory Carroll in Los Angeles and Manasi Pathak in Bengaluru; Editing by Peter Rutherford)