US army captain pushes for rescue of Afghan interpreter, says “We have hours” 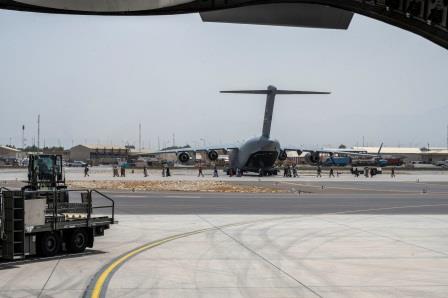 Fearing there may only be hours to stave off a capture, a former US army captain who served in the war in Afghanistan is lobbying for the rescue of his former interpreter.

Scott Henkel served during Operation Enduring Freedom in 2006 and 2007 as an army Alpha team leader.

In an interview, Henkel said he spent “the entirety” of his time in Afghanistan with his interpreter whom he called “Kevin,” his nickname, to protect his identity. Henkel also declined to specify the province where the two worked together.

Now 46, Henkel lives in Colorado and works as a project manager for a cybersecurity firm. “I relied on my interpreter to help me navigate the culture, navigate the protocols and navigate the language barrier,” he said.

Among the most valued contributions from “Kevin,” Henkel said, was his ability to spot local leaders who had ties with the Taliban.

“He could tell that there was a reign of fear that was being implemented,” in a particular town, Henkel said.

He also recalled an instance when “we actually got hit in a valley and we had to call in close air support to save us because we had hundreds of Taliban in these positions up in these hills. Kevin was the one who told us ahead of time, ‘Hey, this was going to happen.'”

From Henkel’s experience with the Taliban, he believes the group will target those first who worked with foreigners.

“They have a list of all the interpreters that have ever worked for NATO,” he said. “The only penalty that is acceptable to them is death. And that extends to his (Kevin’s) family.”

The Taliban, for its part, said in a June statement former interpreters were not at risk, but should “show remorse.”

Pentagon spokesman John Kirby has said the United States will seek to evacuate as many Afghan interpreters as possible.

When Henkel heard about U.S. plans to pull out after a 20-year commitment in Afghanistan, he was “enraged.”

Having led combat operations himself, “there’s usually an exfil – exfil plan means an exfiltration plan… I am not seeing happening right now,” a situation Henkel described as “unacceptable” for the some 18,000 Afghan translators and their families.

According to Henkel, “Kevin” and his family have been turned away at local air fields by U.S. forces while trying to escape, despite pressure to secure his departure from US Representatives Joe Neguse and veteran, Jason Crow, both Democrats from Colorado.

Crow’s office confirmed his advocacy via telephone. “It is pure chaos,” Henkel said “Kevin” told him via text Friday morning.
The veteran and his interpreter are communicating as they always have via webchat.

“We even talked about, wouldn’t it be great someday if our kids could play together in a playground together. And we could grow old next to each other,” he said.