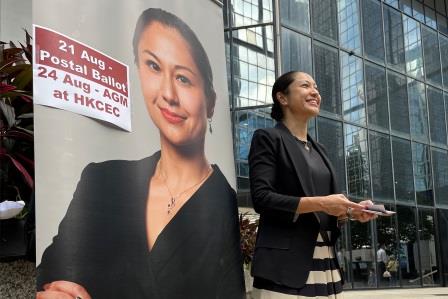 HONG KONG: Hong Kong’s largest lawyer body will vote on its governing council on Tuesday, an annual event made fraught this year by the city’s national security law, with pro-Beijing media accusing some candidates of political bias.

The 12,000 member professional and regulatory body for the city’s legal sector has a watchdog role over legal changes, and a say in the appointments of judges and lawyers who sit on various government advisory bodies. The election on Tuesday is for five of its governing council’s 20 seats.

The election has spawned lurid but non-specific accusations against some candidates in pro-Beijing newspapers. One, Ta Kung Pao, describes a “liberal” faction that will carry out “ulterior political goals” if it wins a majority of seats.

Another such newspaper, Wen Wei Po, called four of the candidates “independence advocates” – a claim punishable under the national security law.

Other major professional bodies have come under pressure recently too, including Hong Kong’s largest teachers union, which disbanded this month after being attacked in pro-Beijing media as a “poisonous tumour”.

Critics, including rights groups and the U.S. government, say the legal system in the global financial hub is straining as Beijing tightens control with a sweeping national security law that outlaws foreign collusion, terrorism, secession and subversion with possible life imprisonment.

Law Society council candidate Selma Masood has faced a barrage of negative coverage in pro-Beijing media since she decided to run in mid-July, despite stressing her political neutrality.

“There is an impressionable aura for many Hong Kongers that the ‘Rule of Law is dead’. I feel that is an extremely negative way of putting it,” Masood told Reuters.

“I want to be the gatekeeper of the Rule of Law and I want to cultivate respect for the independence of the legal profession and the judiciary,” added the Hong Kong-born senior lawyer, who has actively campaigned for votes outside the city’s courts and at law firms over the past few weeks.

Another candidate, Jonathan Ross, withdrew from the poll at the last minute, citing personal risks, saying it was a “sad day for Hong Kong that an election for the council of our honourable institution has sunk to this level.”

All 12,000 society members can vote, and the results are expected to be known on Tuesday night.

In recent weeks the pressure from pro-Beijing media has intensified.

In early August, a cover story in Eastweek magazine featured Ross and Masood, as well as Denis Brock, a partner at O’Melveny; and Henry Wheare, a partner at Nixon Peabody CWL, describing them as a “political” faction aligned with the pro-democracy movement.

Ross and Masood have said such claims are untrue. Brock and Wheare couldn’t be immediately reached for comment.

Two days later, on Aug. 14, the state-controlled People’s Daily warned the Law Society to not become like the Bar Association, which has spoken out on contentious issues, including the national security law and was described in the article as a “scurrying rat”.

“If you draw a clear line against the anti-China and Hong Kong elements, you will not lose the recognition of the government … and suddenly collapse,” the paper wrote.

The city’s leader, Carrie Lam, on Aug. 17 warned that the government might sever ties with the society if it became politicised.

“The concern for me is that human rights law, free expression… and truth are increasingly wrongly considered ‘political’, and legitimate comment is lost in the black hole of sycophancy,” said veteran human rights lawyer and incumbent law society council member Mark Daly.

China’s top representative office in Hong Kong did not respond to questions from Reuters.

Since the People’s Daily editorial, more than 30 articles, columns and editorials in pro-Beijing media outlets, including Ta Kung Pao and Wen Wei Po, have attacked the so-called “liberal” camp, according to a tally by Reuters.

Some of these outlets praised other candidates in a rival “professional” camp, including Justin Yuen, a member of the CPPCC, a Chinese political consultative body; and Careen Wong, who has ties to pro-Beijing politician Junius Ho.