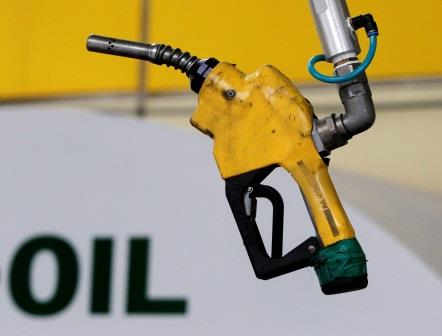 FILE PHOTO: A gas pump is seen hanging from the ceiling at a petrol station in Seoul June 27, 2011. REUTERS/Jo Yong-Hak

TOKYO (Japan): Oil fell on Thursday for the first session this week as renewed concerns about demand amid rising COVID-19 infections cut short a three-day rally, and as production returned in Mexico.

The US Energy Information Administration (EIA) reported that American crude inventories fell last week for a third consecutive week and overall fuel demand increased to the most since March 2020, boosting prices around 10% through Wednesday.

But the demand picture is not entirely bullish.

“For now, US consumers appear to be shrugging off the spread of the Delta variant … However, it seems likely that we are near the peak in US demand, which will act as a lid on oil prices,” Capital Economics said in a note.

Distillate stockpiles, which include diesel and jet fuel, rose last week, gaining 0.6 million barrels to 138.46 million barrels, against expectations for a 0.3 million-barrel drop, according to the EIA data.

The return of output in Mexico, where a fire on Sunday on an offshore platform killed at least five workers and knocked out a bit more than 400,000 barrels per day (bpd) of production, is also pressuring prices.

Pemex had so far recovered 71,000 bpd of production and expects to add an additional 110,000 bpd within a few hours.

More broadly, fresh COVID-19 outbreaks fuelled by the Delta variant of the coronavirus are raising concerns about the strength of the economic recovery globally.

“Although prices had reversed strongly … questions remain on how the ever-surging number of cases globally will impact fuel demand,” said Avtar Sandu, senior manager commodities at Phillip Futures in Singapore.

“In the short-term, the oil market may be volatile with frequent pull-backs,” he said.