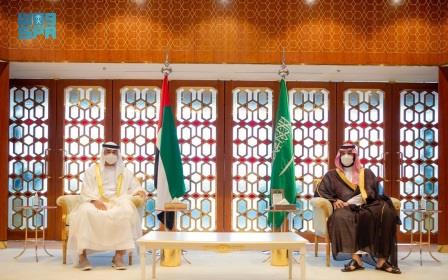 DUBAI (UAE): The crown princes of Saudi Arabia and the United Arab Emirates discussed bilateral relations and other issues in a phone call, state media of the two countries said on Monday.

Despite being close allies, economic competition between the Gulf neighbours has been laying bare differences as Riyadh tries to challenge its smaller neighbour’s dominance as the region’s business, trade and tourism hub in a post-oil era.

Their national interests have diverged increasingly in recent years, as well as their views on regional issues such as their relations with Israel and Turkey.

The UAE on Sunday announced a raft of new projects to boost its economic competitiveness and attract foreign investment, including making its visa regulation more flexible to attract residents and skilled workers.

The UAE’s Sheikh Mohammed visited Saudi Arabia in July after tensions rose between the allies that led to an open standoff over oil policy.