European stocks at 3-week lows ahead of ECB decision 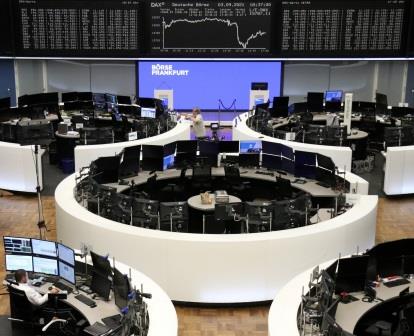 European stocks hit a three-week low on Thursday, tracking Asian shares lower on concerns of slowing global growth, while expectations were running high for the European Central Bank to announce a timeline to start paring its bond purchases.

The continent-wide STOXX 600 index was down 0.4%. UK’s FTSE 100 led losses among regional indexes with a 0.9% drop and Germany’s DAX touched over a one-month low.

British airline easyJet tumbled 9.0% after it revealed plans to raise 1.2 billion pounds ($1.7 billion) and said it had rejected a takeover offer.

Travel stocks, down 1.4%, fell the most among sectors, while oil and gas, banking, and retail shares slipped between 0.7% and 1.0%.

After hitting record highs in mid-August, the STOXX 600 has traded below those levels as fears about the fast-spreading Delta coronavirus variant, slowing recovery, and the withdrawal of stimulus by major central banks worried investors.

The ECB is expected to slow its bond buying via its Pandemic Emergency Purchase Programme (PEPP) in the fourth quarter, according to a Reuters poll of economists, but also reassure markets that this is not the start of a gradual exit from easy policy.

The policy decision is due at 1145 GMT, followed by ECB President Christine Lagarde’s news conference at 1230 GMT.

“We will hear central banks talking about tightening policies but I don’t think we will see a lot of action,” said David Miller, investment director at Quilter Cheviot Investment Management.

“Is a little bit less of QE or repurchases going to really affect markets? I think interest rate rises will be the critical factor.”

Lloyd’s of London slipped 1% after its chairman said the commercial insurance market is likely to be exposed to around 10% of the billions of dollars of insured losses from Hurricane Ida.

Assa Abloy jumped 6.6% after U.S. lock maker Spectrum Brands Holdings Inc said it would sell its hardware and home improvement division to the Swedish rival for $4.3 billion in cash.