COVID-19 infections ease in Sydney, curve flattening not seen yet 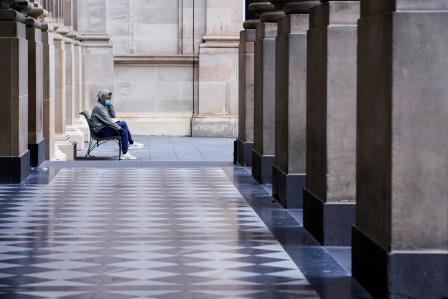 FILE PHOTO: A lone man wearing a protective face mask sits at an unusually quiet State Library on the first day of a lockdown as the state of Victoria looks to curb the spread of a coronavirus disease (COVID-19) outbreak in Melbourne, Australia, July 16, 2021. REUTERS/Sandra Sanders

SYDNEY (Australia) -Sydney’s COVID-19 cases rose at the slowest pace in nearly two weeks on Tuesday, but officials said they needed to see a steady drop in daily cases before deciding whether the infection curve had flattened after 12 weeks in lockdown.

“It’s too early to know if we’re flattening the curve, but we’re seeing, pleasingly so far, that cases haven’t been increasing as fast as they have been,” Jeremy McAnu

U.S. and India in talks over timeline for restarting COVID-19 vaccine exports