How Creative! How ARABESQUE! 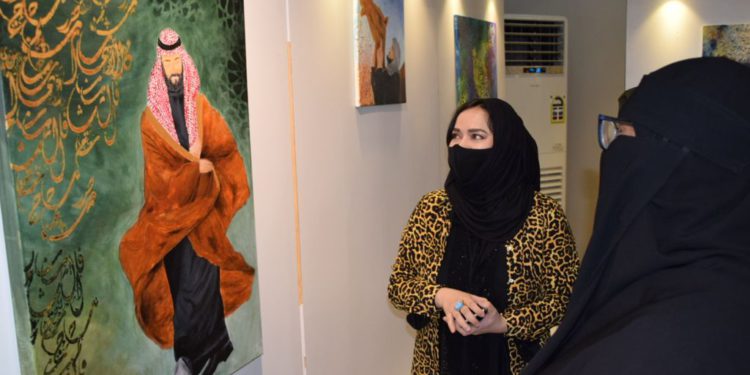 The one of its kind exhibition was inaugurated by a senior and famous artist of Saudi Arabia Shaya Aldossari and director of SASCA Mr Yousif Al Harbi on 9th September.

Ms Rooohy Khan is the First Indian artist to exhibit solo art exhibition at Saudi Arabian Society for Culture and Arts SASCA Dammam which is under the ministry of culture Saudi Arabia.

This is my 45th Exhibition. I Exhibited 31 Paintings including the series of a painting titled ‘hurufiyat series’. My work basically consists of Arabic Calligraphy mostly in abstract form with a touch of Arabesque patterns or Islamic geometric patterns, I make mostly Comtemporary art.

Talking about Roohy Khan, she is the Founder of Mawhub Art Gallery. She is also an Artist/Arabic Calligrapher and a Curator based in Saudi Arabia basically from City Bhopal, India. She is also a Member of Saudi Arabian Society for Culture and Arts (SASCA) and a Member of Women’s Skills Bureau.

She is the First International Arabic calligrapher and Calligraphy Blogger from Bhopal, India With an experiene of 12 years of experience in the field of Arabic Calligraphy, she has curated and organised 9 International Art exhibitions in the Kingdom of Saudi Arabia. Roohy got National Award in the All India Calligraphy Competition and Exhibition (in 2014) held at M.F.Hussain Art Gallery in New Delhi, India.

Qatar all set to showcase the QIAF 2021

Director of Sports, his roles and responsibilities

Director of Sports, his roles and responsibilities