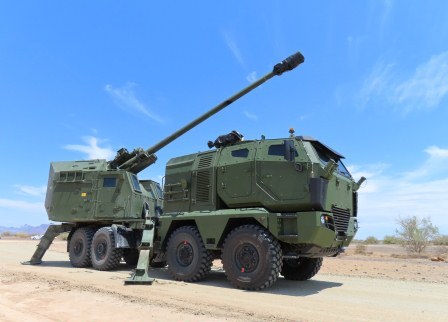 SARASOTA — Global Ordnance, LLC (GO) and manufacturer Yugoimport SDPR J.P. (Yugo) of Serbia, completed a successful testing by the U.S. Army of the NORA B-52 M21 155 mm Mobile Howitzer System at Yuma Proving Ground (YPG), Yuma, AZ on 3 September 2021 after months of rigorous evaluation. An upgraded version of Yugo’s NORA system participated in the United States Army “shoot off” evaluation of mobile 155mm howitzers to determine which systems best fit the Army’s needs. The NORA was put through variety of prioritized tasks designed to test and push the limits of the system.

Yugo’s NORA B-52 M21 is the latest version of the NORA system which received a chassis upgrade along with updates to the fully automatic loading system for compatibility with U.S. Army MACS propellant charges. Yugo design engineers participated in the testing to learn what upgrades would be most needed by U.S. Army artillery crews. Upgrades from feedback during testing are already being designed to meet the mobile artillery needs of the U.S. Army. The NORA B-52 M21 system will be on display at the annual AUSA Exposition in Washington, DC. Oct 11-13.

Both GO and Yugo were pleased with the overall performance of the system and believe the NORA B-52 M21 would be a potent option for the U.S. Army. Marc Morales, President of Global Ordnance, LLC, expressed his excitement after the test.

“The NORA system showed great capability even in extremely challenging Arizona desert conditions during the hottest part of the summer. We drew a difficult time period to show what the system could do, and it knocked it out of the park. The Yugo team provided exceptional support, successfully demonstrated the NORA’s flexibility and performance, and went above and beyond to show Yugo’s commitment to delivering an exceptional product. This is a formidable team and weapon system.”
– Marc Morales, President

With the shoot off completed, the U.S. Army is evaluating the test data to determine the optimal road ahead to modernize Army mobile artillery.

GO is very thankful to Yugoimport for their dedication and commitment for their team of engineers, mechanics and crew that supported the U.S. Army testing. Our combined team displayed our responsive and agile support during the testing at YPG.