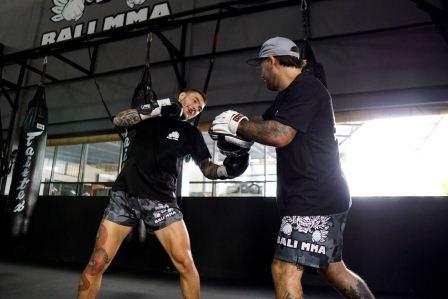 “We are extremely excited to announce that Sek & Don have joined the coaching staff here at Bali MMA. It’s not often that you have the opportunity to bring in not one, but two coaches with this level of experience.” said Don Carlo Clauss, Co-owner of Bali MMA.

With solid backgrounds in training some of the world’s top fighters competing in UFC, One Championship, Glory, WBC, and other top promotions, the two world class coaches are looking forward to share their expertise with the team.

Don Carlo Clauss further elaborated “The coaches, fighters & students here at Bali MMA will have an amazing opportunity to learn and train side by side with two icons and we really can’t wait to see the results. I’m very happy and proud to continue to raise the bar and be a part of the growth of martial arts here in my adopted home of Indonesia.”

Bali MMA has been a hotbed among international athletes, with the likes of Glory Super Bantamweight Champion Tiffany Van Soest and One Championship Strawweight World Champion Xiong Jing Nan have previously prepared their fights at the gym. The gym has also welcomed high-profile athletes in the past, including UFC Bantamweight Champion Aljamain Sterling, current UFC Flyweight Champion Valentina Shevchenko, Alistair Overeem, Antônio Rodrigo Nogueira (Minotauro), and many others.

“We selected Kru Saeksan and Don from over 20 other candidates. We conducted our search globally but at the end of the day, no one can really compete with the Thais in the striking department. Many started trainings at the tender age of 6-8 and typically have over 200 fights in their illustrious careers. Only the best can survive under the harsh and extremely competitive condition.” said Chairman of Bali MMA, Steve Suryadinata.

Selected as one of the top 10 MMA gyms in Asia by Fox Sports, the arrival of the two high-level coaches will further cement the gym’s position as one of the most competitive MMA gyms in Asia, where it continues to raise champions and world-class fighters. According to Co-owner and Coach, Andrew Leone, Don and Kru Saeksan are both widely regarded as the best striking coaches in Asia. “Don & Sek have fought and competed at the most prestigious Muay Thai stadiums in Bangkok with over 400 fights between them. They have also honed their coaching skills working with international fighters at the world famous Tiger Muay Thai training camp In Phuket. It’s exciting to continue to bring Indonesia the best coaches in the industry.”

About Bali MMA
Bali MMA is a Mixed Martial Arts gym based in Bali, Indonesia, founded by Steve Suryadinata, Don-Carlo Clauss, Anthony Leone, and Andrew Leone. The team recruited world-class coaches and athletes from around the globe to collectively form one of the strongest competition teams in Asia today. The team is ranked Top 10 in Asia by Fox Sports and is proudly called home by a number of world champions in MMA, Kickboxing, Muay Thai, and Brazilian Jiu-Jitsu.

About Kru Don
Former Evolve MMA coach and Tiger Muay Thai coach, Kru Don started competing in Muay Thai at the age of 8 under the tutelage of Leamphet Kiaychaiyong. He went on to move to Bangkok and fought at the premier Muay Thai stadiums of Lumpinee and Rajadamnern. He also has experience in boxing and this shows in his Muay Thai fights, where he has many wins by KO using his fast, powerful punches. With over 200 fights under his belt that include 170 wins and 35 losses, Don is regarded as one of the best Muay Thai coach in Asia and has trained many world-class fighters competing in the UFC, One Championship, Glory, WBC, and other world-class promotions.