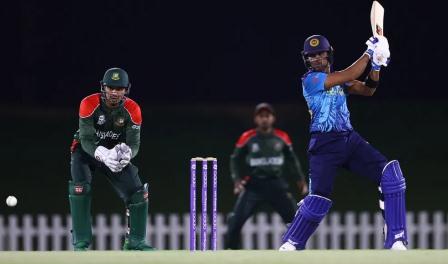 Drawn in opposite groups in Round 1, Sri Lanka and Bangladesh played out a topsy-turvy warm-up match in Abu Dhabi that Dasun Shanaka’s side won by four wickets with an over to spare.

Batting first, Bangladesh posted a total of 147/7 from their 20 overs. Soumya Sarkar was the Tigers’ top-scorer with 34, while Dushmantha Chameera was Sri Lanka’s most dangerous bowler, taking 3/27 from his full allotment.

In the chase, Avishka Fernando led the way for the Sri Lankans, making an unbeaten 62 off 42, finishing things off in the company of Chamika Karunaratne (29* off 25). As was the case with the bat, Sarkar was Bangladesh’s best performer with the ball, taking 2/12.

Ireland enjoyed a confidence-boosting victory over PNG in Abu Dhabi, pulling off an eight-wicket win.

The most encouraging thing to come from the match for Ireland was the participation and performance of captain Andrew Balbirnie, who had suffered a foot injury over the weekend. Balbirnie made an unbeaten 42 in a chase of 97, with No.4 Curtis Campher (42* off 35) providing him reliable company.

Scotland beat the Netherlands by 32 runs

Scotland’s bowlers stepped up in a big way to help their side defeat Netherlands in Abu Dhabi.

Electing to bat first, Scotland managed a total of 122/6 with Calum MacLeod (32* off 34) and Michael Leask (30) the best of the batters. MacLeod proved the backbone of the innings at No.4, while Leask brought impetus to the innings at the end. Fred Klaassen shone with the ball for the Dutch, taking 2/21.

Scotland’s total proved more than enough as Mark Watt (4/10) and Chris Greaves (4/19) took four wickets each to bowl the Netherlands out for 90.

Tournament co-hosts Oman enjoyed a comfortable victory over Namibia, impressing with both bat and ball.

Batting first, they managed a total of 152/8, with Aqib Ilyas’ 30 off 20 providing the innings plenty of thrust. Ruben Trumpelmann was the best of Namibia’s bowlers, taking 2/30.

Despite a steadying 32 from captain Gerhard Erasmus and an unbeaten quickfire 20 off nine from Trumpelmann, Namibia were held to 120/9 as Kaleemullah took 4/23.

See the full fixture list for the warm-up matches