Green March Event organized by the Moroccans of UAE 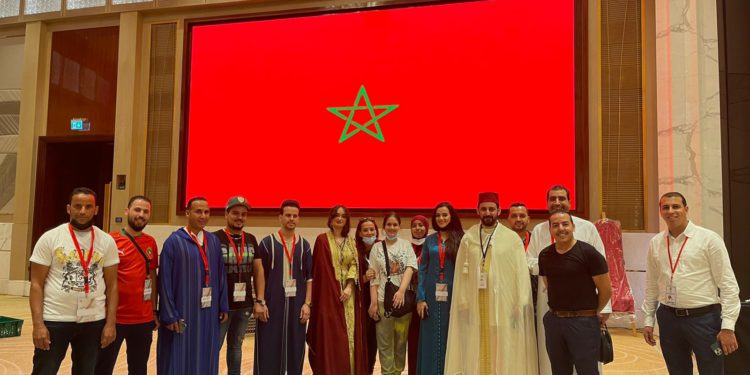 On the 46th Anniversary of the Green March, an great ceremony was taken place in UAE to indicate its eighth season. The slogan of this occasion is (Morocco in its desert and the Sahara in its Maghreb), as stated by of his Majesty King Mohammed VI’s speech in this occasion. The Event saw the presence of the diplomatic mission in the United Arab Emirates, Mr Abdelilah Odads, Deputy Ambassador of the Kingdom of Morocco in Abu Dhabi, and Mr. Khaled bin Sheikh, Consul General of the Kingdom of Morocco in Dubai, and Sheikh Hamid bin Khalid al-Qasimi, and the community of Moroccans of UAE and honoured guests from neighbouring countries. The Event was organised by the community of “Moroccans of UAE”, sponsored by Vetronic and supervised by Mr. Ahmed Al-Malouli with the coordination of Mrs. Hayat Alaoui. The joyful ceremony was characterised by artistic celebrities who joined the celebration of this occasion such as: Mrs Soumiya Khadiri, an fashion designer, Mr Abdullah bin Shamma, an famous Emirati poet, and singers who also joined our occasion such as: Ismail Marrakchi, Simon Al Manwar, Khaled Hennad, Khaled Al Hindi and Zakaria. They also inaugurated Moroccan medical staff who worked in hospital in this pandemic in UAE.

In other points, the UAE Pride of the Homeland Voluntary Association honoured each of the Moroccan groups in the UAE. A shield was handed over, inaugurating the Embassy of the Kingdom of Morocco in Abu Dhabi and The Consulate General in Dubai to Mr. Khalid bin Sheikh for arranging various events in UAE.

Mr Ahmed Al Malouli, a member and an admin of the group, states that the group has been arranging numerous events of national events that has been echoed with the people of the Moroccan community of UAE, and to those who attend these events. The Green March has its own significance in the Moroccan history, which makes an importance to all Moroccans, and its main goal is to establish the Moroccan identity of residents of the UAE with collaboration of their homeland.