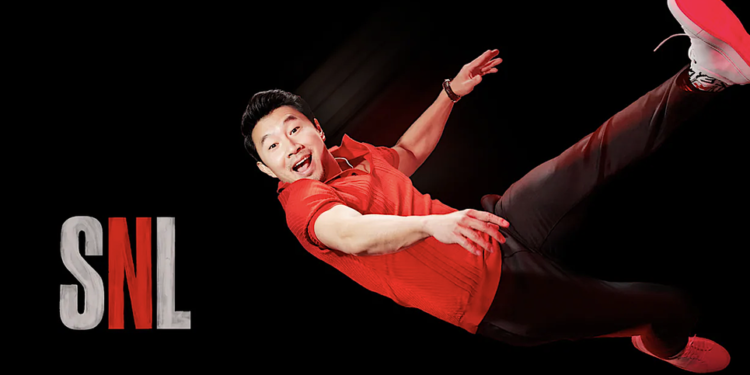 “What happened?” “I think just a total lack of imagination and ability.”

In his monologue kicking off tonight’s pleasantly workmanlike Saturday Night Live, Shang-Chi star Simu Lui joked about his uniquely Canadian manner of nudging Marvel toward having its first big screen Asian superhero. (He tweeted a polite request in 2014 and then responded with a succinct, “Thanks for getting back to me” when he was ultimately cast in this year’s Shang-Chi And The Legend Of The Ten Rings.)

As SNL host, the former Kim’s Convenience star stayed pretty Canadian all night, honestly. In the run-up to this week’s gig, Liu made the case that he was willing to get weird with it, but, in the end, he would up playing straight man to a dog and a vomiting cake. Liu was fine in what he wound up with, but, like the episode itself, his hosting stint is likely to be forgotten pretty quickly.

The one sketch he was in that had any juice to it was the pre-tape where he and Bowen Yang try to outdo each other for the most “First Asian Who…” awards they’re received. Apart from making sport of all the hoopla surrounding their positions as “first fully Asian cast member” and (as Liu joked in his monologue) “the first Chinese host on SNL—to be the fourth Chinese host on SNL,” Yang and Liu found a very funny groove in trying to out-nonchalant the other.

Liu, asked to do little more than stand aside while other people got the laughs all night, finally was given a little license to be funny on his own. Representation matters, but so does mocking corporations, publications, and late-night comedy shows who hype their ridiculously belated achievements in actually hiring people who aren’t straight white guys. The best part of the premise here is how Yang and Liu are individually very invested in besting the other in the “first Asian” sweepstakes, their competitiveness adding another layer to the increasingly absurd joke.

Yang’s award for “First Asian cast member to mispronounce ‘boutique’” (“Is it not ‘boo-tee-qua’?,” Yang asks) vies with Liu’s award for being the first Asian person to play it cool in his Splash Mountain photo. And Liu, shown excited accepting a lavish award for first Asian person to finish Starcraft II sees him noting happily, “There’s no way this is true, but thank you!” In an exchange funnier and far less Canadian than he got otherwise tonight, Liu responds to Yang’s inclusion on the People Sexiest Man Alive list thusly:

It’s the most personality Liu got to exhibit all night, and the show could have used a lot more of that. As befits a show where the biggest laughs came from goofing around with a (very good) dog, this sketch stood out simply by virtue of letting Liu be the center of things.

Best/Worst Sketch Of The Night

The Best: The Bowen & Simu sketch was the best by a wide margin. There was going to be a sketch about how two accomplished performers deal with being used for diversity cred, most likely, and Yang and Liu outdid expectations by playing heightened and very funny versions of themselves. There’s a crisp absurdity that builds throughout, and Yang’s topper that his gay+Asian (+Canadian) brand is always going to score more points than Liu’s mere Asian+Canadian brand caps things off with a final little snap.

The Worst: There’ve been very few outright stinkers all season, and tonight’s affably mediocre episode didn’t really have a terrible sketch. Several sketches were hobbled right out of the gate by overly long and deadeningly laugh-less setups, with the very first sketch suffering worst. That’s never a good sign. The karaoke report from a North Carolina bar was—cute? I guess?