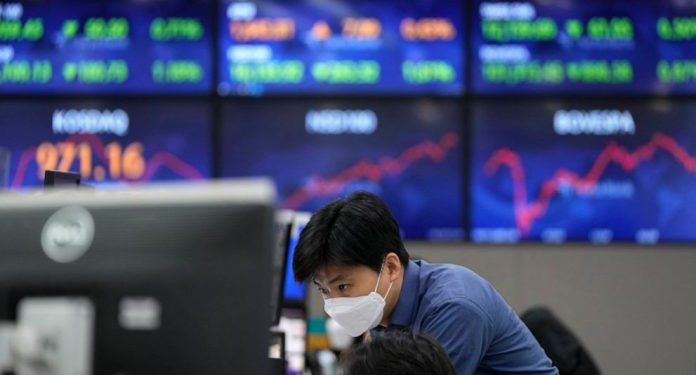 TOKYO — Asian shares were mostly higher Wednesday amid nervous trading due to worries over the newest coronavirus variant.

Anderson Alves, a trader at ActivTrades, said Asian markets were nervous after an overnight slide on Wall Street and comments from Moderna’s CEO that existing COVID-19 vaccines may be less effective against omicron than earlier variants.

“Traders will look for new insights regarding the new variant and its impact on the current vaccine framework,” Alves said.

Wall Street’s losses deepened after the head of the Federal Reserve said it will consider shutting off its support for financial markets sooner than expected.

The S&P 500 fell 1.9% to 4,567, erasing its gains from a day earlier. The benchmark index sank 2.3% Friday for its worst loss since February, only to rise 1.3% Monday as investors reconsidered whether the reaction was overdone, before giving way to Tuesday’s loss. The index closed out November with a 0.8% loss. That follows a 6.9% gain in October and a 4.8% drop in September. The index is now up 21.6% for the year.

The sell-off accelerated after Fed Chair Jerome Powell told Congress the central bank may halt the billions of dollars of bond purchases it’s making every month “perhaps a few months sooner.” It had been on pace to wrap up the purchases, meant to goose the economy by lowering rates for mortgages and other long-term loans, in June.

That would open the door for the Fed to raise short-term interest rates from their record low of nearly zero and dilute a major factor that has sent stocks to record heights, swatting away concerns about an overly pricey market.

As investors moved up their expectations for the Fed’s first rate hike following Powell’s remarks, yields on short-term Treasuries rose.

The whammy on interest rates came after stocks were already weak in the morning due to concerns about how badly the fast-spreading omicron variant of the coronavirus may hit the global economy.

If omicron does ultimately do heavy damage to the global economy, it could put the Federal Reserve in a difficult spot. Usually, the central bank will lower interest rates, which encourages borrowers to spend more and investors to pay higher prices for stocks.

But low rates can also encourage inflation, which is already high across the global economy. Powell acknowledged in his testimony before Congress that inflation has been worse and lasted longer than the Fed expected. For months, officials described inflation as only “transitory,” but Powell said that word no longer works.

One signal in the bond market was also flashing some concern about the economy’s prospects. Longer-term Treasuries usually offer higher yields than shorter-term Treasuries, in part to make up for the increased risk that future inflation may eat into their returns.

NATO debates the lessons of mission creep in Afghanistan

NATO debates the lessons of mission creep in Afghanistan