Bharat Gaurav Award – A Moment to Cherish for all Indians 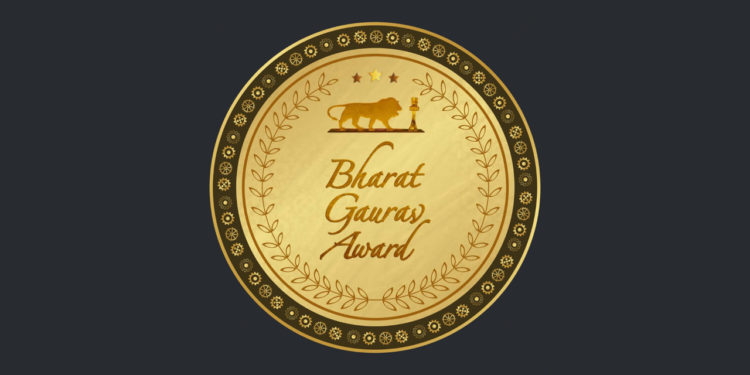 Dubai (UAE) – The ‘Bharat Gaurav Award‘ 2021 was held in Dubai on December 23rd by the ‘Sanskriti Yuva Sanstha’, an NGO, which works with the vision ‘The rise of Indian Culture and Society’. From last 20 years through the various social programs organised, it has has made its own mark in the Country. This Award which started in the year 2012, felicitates people from all around the World who has made remarkable achievements in their respective fields of work. This year, the event had a huge gathering which included representatives from countries like India, UK, USA, New Zealand, Paris, Malaysia, and Dubai.

His Excellency Awad Mohammad Sheikh Mogrin (Director General of Emirates, Administrative Officers of Department of Foreign Trade and Economic Development in Dubai) said that Indians have spread laurels in the whole world. When India got independence, no one
even thought that one day Indians would make their mark on the world stage in this way. Today, Indians are playing a leading role in
all fields and the popularity of Indians is increasing in the world. This idea was expressed on behalf of Sanskriti Yuva Santha at the
grand ceremony at Hotel Atlantis in Dubai.

On this occasion, President of Sanskriti Yuva Sanstha, Pt. Suresh Mishra said that it is a matter of pride for all of us to come to Dubai
and to organize this felicitation ceremony. I request and expect from all the personalities who have received Bharat Gaurav Award today to bring the youth forward for the development of the country. On this occasion, Sanskriti Yuva Sanstha’s President of the function Suresh Mishra has said that we must take a pledge to Stay Connected to the soil of our country in such a way that our
belongingness and Indianness continue to grow. On this occasion, the Principal Patron of Sanskriti Yuva Sanstha, Lokendra Singh
Kalvi mentioned that this is the 8th event and the sanstha has done tremendous job with the events like Jaipur Marathon and social
mass movement and has spread social consciousness that NGO has taken to spread the word of culture and will continue to move
forward in the same way.

Mishra also mentioned that in the last eight years, Art of Living founder Sri Sri Ravi Shankar, movie star Manoj Kumar, Nobel laureate Kailash Satyarthi, world’s most influential woman Indira Nooyi, Jain saint Pulak Sagar, Lokesh Muni, Prassana Sagar, Major Dhyan Chand, and about 200 NRIs, including Gmail’s inventor Shiva Ayyadurai, Neerja Bhanot have been honoured with this prestigious award. Lokendra Singh Kalvi, the function’s primary speaker, claimed that Indians are now making their mark all over the world. He said “Now, when we are honoured in Dubai while standing beneath our tricolour, we are quite proud”.

Mr. Abdul Muqeet, well known as the Paper Bag Boy, was presented with the Yuva Ratna Award on this occasion. He was the winner of the UAE’s Highest Citizen Award. In addition, Mr. Shubham Taylor, an international badminton player, received a Sports Award.