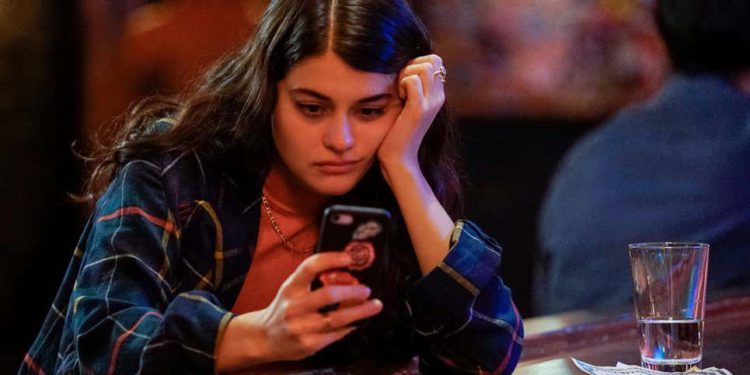 Drunk acting is hard to do. For every incredible Mads Mikkelsen in Another Round or Richard E. Grant in Withnail & I, there’s an actor hamming it up— swaying from side to side and slurring every other word. Luckily, across the board, the drunk acting in Single Drunk Female falls into the latter category.

Sofia Black-D’Elia makes for an incredible lead across all 10 episodes, selling every moment of Samantha’s story as a woman with high-functioning alcoholism rebuilding her life. When the series begins, Samantha is working as a writer for a New York media outlet called Bzzzz, showing up late for meetings and drinking straight vodka out of a water bottle. When her boss (played by the always hilarious Jon Glaser) confronts her, Black-D’Elia mines laughs out of the moment, underplaying the obvious markers of drunkenness and instead playing up the belligerence; her lapses in coherent logic are undercut by a subtle ever-shifting center of gravity. The meeting ends in disaster, and Samantha finds herself in trouble with the law and forced into court mandated sobriety.

The show, from first-time creator Simone Finch (The Conners), follows Samantha over the course of a year, trying to maintain her sobriety and rebuild her life. True to well-worn comedy tropes, she returns, humiliated, to the small town she grew up in and is forced to move in with her mother (Ally Sheedy). Black-D’Elia proves just as compelling a presence playing sober as drunk, and has equally impressive dramatic chops to go alongside her comedy. Samantha’s pain and struggles to remain sober and make amends are moving even when punctuated with her snarky retorts. She perfectly embodies the show’s tonal balance, which often feels off when she’s not onscreen.

As Samantha works to stay sober, she assembles a support network. Her new sober family includes her NPR superstar sponsor, Olivia (Rebecca Henderson), and her stylish grocery store boss, Mindy (Jojo Brown). Most of all, she leans on drunken one-night stand turned potential sober love interest (played by the charming Garrick Bernard), who she has to postpone the inevitable romance with in order to obey AA’s “no relationships for your first year of sobriety” rule. Their chemistry is palpable, and it grounds the show’s stakes, heightening what a relapse would mean as it would reset the clock on their wait to be together.

Equally interesting is Samantha’s rebuilding of her relationship with former best friend Brit (Sasha Compère), who is now engaged to Samantha’s ex-boyfriend. The two performances line up well: two complicated women in an ever-shifting power dynamic. The show wisely sidelines the bland man they once fought over and instead focuses on how these women have a rare connection, and an ability to see through each other’s artifice. The dynamic between Olivia and her wife proves less weighty but similarly delightful, as they navigate Olivia over-extending herself with her devotion to her sponsees and an IVF journey. It’s a refreshing change of pace to see a queer couple with such unadulterated adoration for one another (and their ludicrously huge cat).

The show works less well when it goes for broader comic strokes. A St. Patrick’s Day episode (apparently, “St. Patrick’s day is The Purge for sober people”) has some strange subplots and surreal flourishes that are as unfunny as they are jarring. And while Sheedy is always a delightful presence, many of her plot lines feel extraneous, including some low-stakes book club shenanigans. Her relationship with her boyfriend (played with signature enthusiasm by Ian Gomez) is perfectly pleasant to watch, but aside from some brief allusions to missing her late husband and misunderstanding the nature of alcoholism, she isn’t given a real arc. By the end, the character feels underserved.

But the arc for Samantha is fully and beautifully realized right up until the final episode’s credits roll. Some episodes provide us with flashbacks to see exactly how much of a drunken disaster she was, and we also get to dive deep into her unresolved grief over her father’s death and the toxicity of the New York media world to which she longs to return. Black-D’Elia delivers a phenomenal performance across every episode and obstacle—from the insecurities of writing without alcohol, to the exhaustion of sobriety-induced insomnia, to the frustration of being incredibly horny and in the presence of Garrick Bernard’s abs. She creates a central protagonist that’s raw and sensitive with a razor-sharp wit. Samantha’s smallest victories, including a tiny but sober paycheck and turning down a bridal shop glass of champagne, feel like fully earned triumphs. By the final episodes, we’ve moved far from the “single drunk female” slurring at her boss: While Black-D’Elia’s drunk acting is always welcome, it’s just as joyful to see her as the person Samantha evolves into.